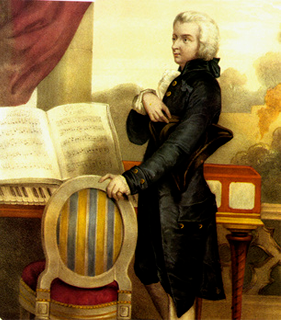 Wolfgang Amadeus Mozart, a miraculous child who travelled in Europe at an early age and stunned the royal courts with his interpretative skills. Nowadays, the whole world remembers him mainly as a composer of immortal works.
In Prague his music has been holding a special position for hundreds of years, mainly thanks to the premieres of his two operas, which he himself conducted. How was Mozart perceived by Praguers? W. A. Mozart came to the territory of today’s Czech Republic as a little boy, when the Mozart family, on the way from Vienna to organize the concert, stopped in Brno. However, the concert did not take place, because Wolfgang was sick with the smallpox he had caught at the Viennese court during his entire stay.

His next visit – already at adult age – is much happier. After a great success of the Marriage of Figaro in Vienna, he accepts an invitation to introduce this opera in Prague. Praguers already know Mozart’s name at this time, thanks to the very successful execution of his opera The Abduction from the Seraglio. However, literary “figaromania” is triggered in Prague – the opera is repeated several times, the aria is played in the noble salons, on the streets and so on. Then the impresario Pasquale Bondini takes advantage of “madness” and asks Mozart to write an opera directly for Prague.

The world premiere of Don Giovanni in Prague

Mozart accepts, and so the most respected Mozart opera, sometimes called the Opera of operas, Don Giovanni, is created based on the libretto by Lorenzo da Ponte. In order to conduct his opera’s premiere, Mozart is going to Prague from Vienna at the beginning of October 1787. Here he experiences a very friendly and warm reception, but there is very little time to rehearse the opera. It is even said that Mozart wrote his brilliant prelude to Don Giovanni only in the morning of the premiere, and so the orchestra played the very beginning of the opera from the sheet. Whatever the reasons, the premiere was postponed for the first time (it happened one more time when one of the singers fell ill) and replaced by an alternative program, such a popular “Figaro”. Eventually, the great success of Don Giovanni and its many repetitions prove that waiting for the premiere did not interfere with the overall reception of this opera.
On the contrary, a big “shock” is waiting for Mozart in Vienna – Don Giovanni is welcomed here very coldly. Mainly as a result of this fact, the Praguers tend to appropriate Mozart as “their”, because “only they” understand his music – an often-spoken statement

a saying which became famous in the Bohemian lands, origins in this.

It is clear that the differences in the acceptance of Don Giovanni opera in the two cities had to be very strongly perceived by Mozart. The overall warm relationship of the Prague people to Mozart was soon proved – Prague was literally hit by a wave of sadness when the report of Mozart’s death came here. A lot of people who actively participated or came to listen to mourning ceremony and Mozart’s Requiem in St. Nicolas Church in the Lesser Town on 14th December 1791, prove the great popularity of this composer among Prague audience.

Mozart is still closely connected with Prague today. His operas are regularly played in The National Theatre, the piano Mozart played is exhibited permanently in the Czech Museum of Music. There is his museum at Bertramka, where W.A. Mozart lived in Prague
Today, many visitors of Prague follow Mozart’s tracks in this city and listen to his wonderful music!

Are you interested in Mozart Dinner? Buy your tickets now!
Book Now